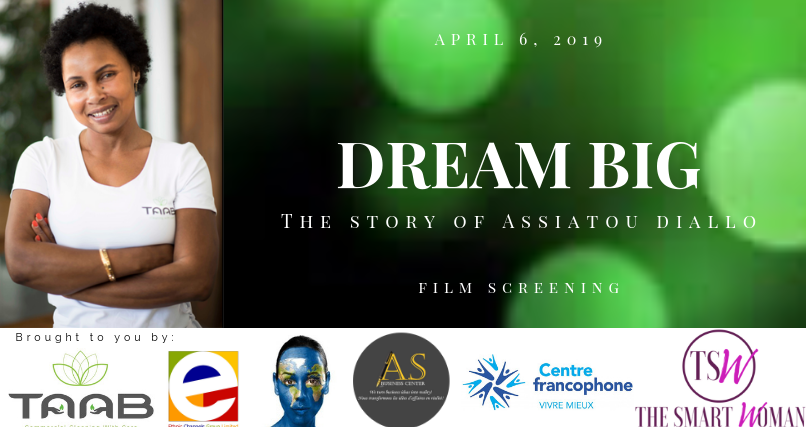 ‘My vision of entrepreneurship is to inspire others’

Assiatou Diallo was born in Guinea, a small country in West Africa, into a polygamous family of 11 children.  Assi was the last and only girl born with 6 brothers from her father’s side and second born with 4 children (2 girls and 2 Boys) on her mother’s side. She never new her dad, because he passed away when Assiatou was 9 months old.

In 2000 she got hired by a German company called Hydroplan, who had a project to build 250 water pumps in rural communities, to access clean water.  This opportunity changed her life. For the next 2 years she started travelling out of the city and country through her work. Her first time to take an airplane was in February 2001, at the age of 25. She got so stressed before getting on the plane, but once again her fighting spirit took control and she went to Gambia for work.

She performed so well that Hydroplan decided to pay for her to take a vacation to Paris (visa, pocket money and so on).  She went to Paris in August 2001 for 3 weeks. She was so culture shocked, when she arrived, that she decided to go back to Guinea after 2 weeks and decided not to be so adventurous, because her experiences did not match the expectations she had for this dream trip.

After her contract with Hydroplan ended, Assi got married in November 2002.  She was excited to start a family with her new husband, but destiny stepped in, once again. After 5 miscarriages and extremely poor health, she decided to go to Germany to study the language and seek medical advice about the difficulties she was experiencing trying to conceive a child.

After living for 1 year in Germany, she went back to Guinea and started all over again. She opened Nayleen Drugstore, where she sold cosmetics and fragrances (Lancome, Chanel, etc). Before moving to Germany, in 2000, she had also registered a cleaning, childcare and security company and was actively networking to develop the business.

In 2006, Assi was blessed with a pregnancy that would finally lead to her first child; a beautiful baby boy.  She arrived in Montreal, Canada, in October 2006,

6 months pregnant and looking to start a new life. She knew this was the place for her, because she fell in love with Canada the moment she stepped off the plane.  You can only imagine how difficult it was to be alone and pregnant in a new Country, trying to navigate the bureaucracy of immigration, but she kept fighting and received her Permanent Residency in just 5 months.

Assiatou Diallo was still fighting to make her life better and help others.  A single mother, with a 1 year old son, she got involved in volunteering and went back to school at H.E.C. (an affiliate with the University of Montreal) to study Human Resources. Although she went through depression and stress, she never gave up and decided to move to Toronto.

She came to Toronto and lived in a shelter (transitional housing, Beatrice House) for 2 years. When she arrived in Ontario, she could not speak a single word of English. She decided to go to school for ESL classes at College Boreal and, in just 5 months, got her ESL level 6.  Next, Assi went to do her upgrading with Woodgreen through the Boundless Possibilities for Women Program.

Assi had aspirations of working in the banking industry in Canada and it seemed that her hope was going to become reality when she was promised a position with BMO.  She planned to move out of the shelter, got an apartment and began making plans for her new career, when the job was pulled out from under her due to personnel changes and poor internal communication at the bank.  Another obstacle that would test Assi the fighter.

She was undeterred by this latest disappointment and bounced right back by securing a position at the Centre Francophone de Toronto.  She worked at the non-profit for 4 years as an HR Assistant, Receptionist, Executive Assistant to the Executive Director and Settlement Worker in the schools. Although the work was fulfilling, Assi decided to go on her own, be her own boss, focus on her business and go back to school part time to study Business Management.

Assiatou Diallo is an entrepreneur, mother and avowed feminist. From a young age she has actively participated in initiatives supporting women’s issues. Her current interest is to promote the emancipation and financial independence of women in general and especially women who are victims of domestic and family violence.  She is dedicated to helping others and is very involved in her community. In 2013, she was recognized by the YWCA for her success and delivered a keynote speech at the YWCA Women of Distinctions Awards, in recognition of her positivity and incredible perseverance.

Assiatou is currently the president and CEO of TAAB Cleaning Inc., a commercial and residential cleaning business, which also offers nanny and home babysitting services. She plans to dedicate a part of this community enterprise to support the elderly.

Assiatou Diallo will make it to the top, because she is a fighter, positive, and strongly believes in herself and her own future success.